Publishing For All: CrazyLabs offers publishing for the other 99%

Publishing For All: CrazyLabs offers publishing for the other 99%

In the super competitive hyper-casual landscape, the top publishing houses have clear KPIs for publishing a game and they’re mainly focused on games with potential to scale. These top publishers rarely publish games unless they are convinced they can top the charts and stay there, and unless they know they can scale and make millions of dollars. That means they try to reduce the CPI and increase the retention, and it also means that only a small number of games actually make it to the top. How small? On average, from 150-200 prototypes submitted to the publishers in the big league, only 1 game will get published. For CrazyLabs this strategy has proven very successful during 2019-2020, and according to AppAnnie reports, in 2020 CrazyLabs generated an average of 30% more downloads per published game than the other publishing houses in the top 5, due to its automated UA and monetization tools. 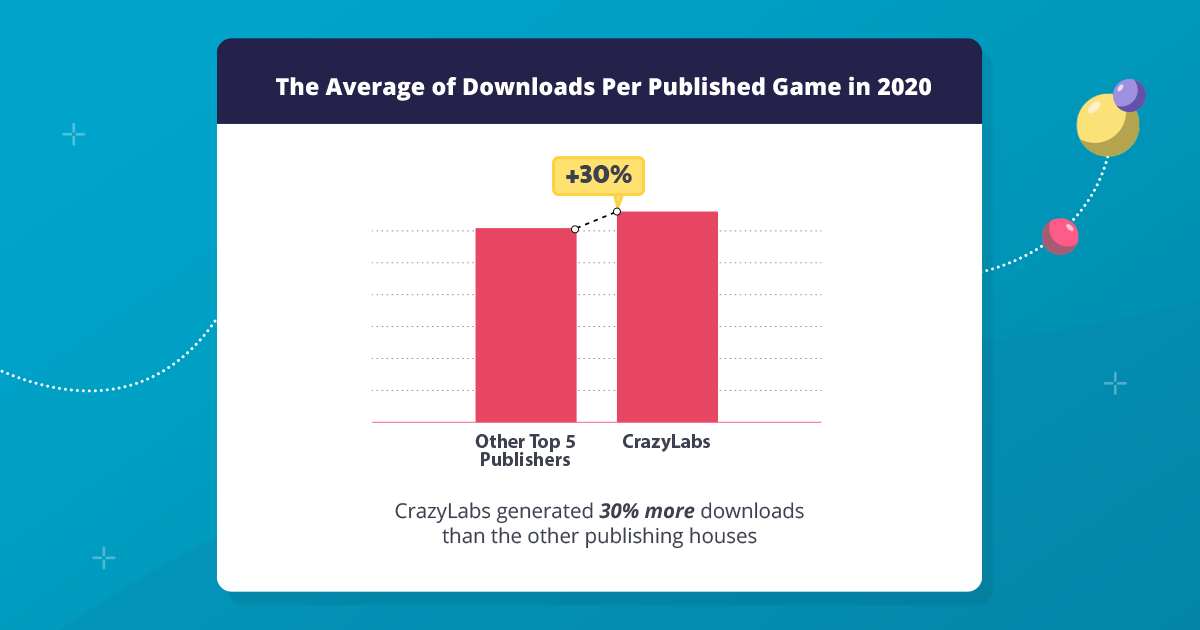 Too many times developers find themselves with a game that’s good – but with a lower potential of becoming a hit, according to the top publishers. While a $20,000 or even $5,000 monthly profit can be an amazing income for the developer, it is well under the standard profit for the publisher. The result – a game that could have provided a nice income for the developer who invested months working on it, ends up overlooked and unpublished. For the developer this is sometimes perceived as money on the floor, and they’re not wrong.

That’s why we wanted to change this course of action. Our new initiative, called Publishing For All, can create an additional revenue stream for the developers, one that wasn’t available until today. With this new offer, CrazyLabs supports its partners and helps them release and scale games that may have otherwise not been published. As game developers ourselves, we are deeply aware of our partners’ needs – we experienced it first hand. We know how a monthly income from a game can set a new path for developers and push them forward. True, the potential profit is lower than the standard CrazyLabs normally sets, but by generating a significant income for the developer, we can help him or her stay in the game (see what we did there?) and continue working on their next hit.

The new plan sets specific KPIs, but puts the developer’s interest first. Games considered for the program will need a promising retention or ARPU that will be defined per case, as well as a CPI of up to $0.8. The game will remain in the developer’s account, giving the studio control and responsibility for the game, its updated timeline and maintenance roadmap.

This is yet another step by CrazyLabs, a top 3 mobile games developer and publisher, aimed to build more self-sustained game development studios that can create hyper-casual hits on an ongoing basis. This step comes in continuance to recent initiatives by CrazyLabs:

– CrazyHubs – the hyper-casual gaming accelerators for developers who are interested in learning how to create chart-topping hyper-casual hits. Members of the hub enjoy a 3-6 months training program along with professional and financial support.

The Publishing For All initiative will be supported by the CLIK SDK and the CLIK Dashboard, CrazyLabs self-serve platform for testing hyper-casual games and monitoring usage to understand players’ preferences. Together, CrazyLabs’ SDK and Dashboard enable studios to monitor the entire publishing process and usage funnel with full transparency, so they can easily move forward to scaling their game.

“It’s very unusual, and extremely helpful for a developer like me”, says Alexandr Janashvili from RoboFruits Games, the studio behind Road Hills. “CrazyLabs’ ability to support Road Hills and offer tools to publish the game, even though it did not meet publishers’ hit KPIs, was a key differentiator for me and my studio. For us it’s incredible, since the monthly income allows us to keep doing what we love – developing new games”.

“As developers ourselves, we know how frustrating it can be to see your game get so close, only to end up nowhere” says Guy Tomer, COO at CrazyLabs. ”As part of the ongoing relationship with our partners, and further to their feedback, we decided to create a new funnel dedicated to games that can generate a profit for the developer. We’re proud to be working with over 350 developers worldwide, and welcome new developers who are interested in applying.”

The program is already up and running: gaming studios and indie developers are welcome to submit their hyper-casual games and test them inside the CLIK Dashboard. Developers are also invited to submit games that have been passed on for publishing and enter the program – Apply Here