The Must-Have of Level Design in Hyper Casual Mobile Games

The Must-Have of Level Design in Hyper Casual Mobile Games

In the article “5 Steps to Get Your Game Published” we wrote about that ever so elusive “Yes” moment that you need to share with potential partners if you want your game published. Now it’s time to talk about level design and understand what happens after your players finally said “Yes”.

– The history of Hyper Casual games

– The origin of levels in Hyper Casual mobile games

– How to structure your level design

– How to optimize your level design

– The history of Hyper Casual games

Let’s start from the beginning:

If you recall, between the years 2014-2017 most Hyper Casual games targeted a younger audience with more core gamer mechanics. Back then, these games were hard and had no levels – just infinite impossible loops.

In 2017, Hyper Casual took the Top Free Games charts by storm, as more and more publishers started to invest heavily in user acquisition for Hyper Casual games. This brought on a massive audience of players, but instead of younger gamer audiences, suddenly mobile gamers, the largest market of gamers, joined the Hyper Casual genre. This audience included more female gamers, players without a video game console or gaming PCs, and their #1 gaming console was their mobile phone.

The origin of levels in Hyper Casual mobile games

This change in the audience forced the developers to change the games and take the difficulty curves shown in level design of casual mobile games like puzzles, merge, hidden objects – and start applying them to the Hyper Casual mobile games.

What does that mean?

Endless impossible loops were replaced with levels.
Instead of learning by dying from the 1st second in the game, players had a very structured learning process.

How to structure your level design:

– Levels 1-2 – teach your players the controls. We refer to these levels as “don’t kill me yet” levels.

– Levels 3-10 – give your players some awesome progress so they can feel great about themselves and clearly see that they are actually getting better at your game.

– Levels 11 and above – gradually introduce your players with interesting new level elements and obstacles, but always make sure to give them a level or two to learn about these new components.

When a new obstacle / level element is introduced to the players, the 1st level will just teach the players what it does without trying to make them fail on it. Afterwards you can gradually increase the level of difficulty with each level they pass.The element / obstacle will then be added to the level funnel.

This process of how to implement new level components will rinse and repeat every time you introduce your players with a new element / obstacle.

See the graph below to better understand the shifts in the level of difficulty: 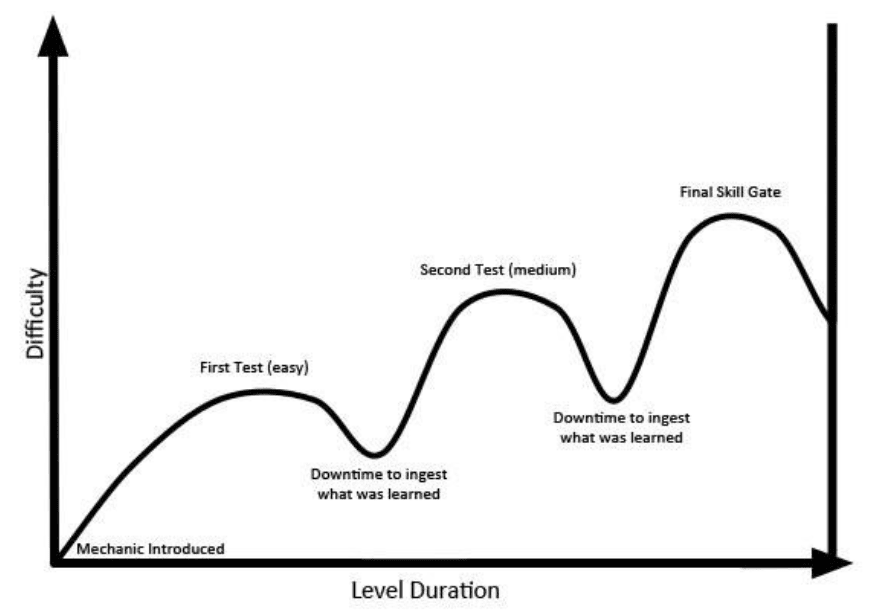 How to optimize your level design

Your game is ready for soft launch? We highly recommend to implement an analytics tool to help you monitor your game. Once you soft launch your game, you need to:

– Pay attention to your level funnel

– Track the average no. of fails

– Track the churn by level

This data is your strongest tool for changing the KPIs of your game once you’ve launched. You will be able to impact retention and thereby your game’s LTV just by ongoing funnel optimizations.

When it comes to Hyper Casual mobile games, you have to track the first 7 days of the funnel, as most of your ad revenue will come from that time period. Take into account how much revenue is generated by every level, and find that sweet spot between the average no. of fails, the completion rate, and the revenue generated by that level.

Remember – if you make a level easier, your average no. of fails will drop, more players will pass to the next level, and you may have better retention and progress on your funnel. However, take into consideration that maybe that hard level was important for generating a revive element with RV (rewarded video) – especially if it came early in the funnel. This is why you always have to test and compare LTV between funnels – it’s a guaranteed way to optimize for maximum revenue, which will then allow your game to scale up.